Use the News To School Yourself 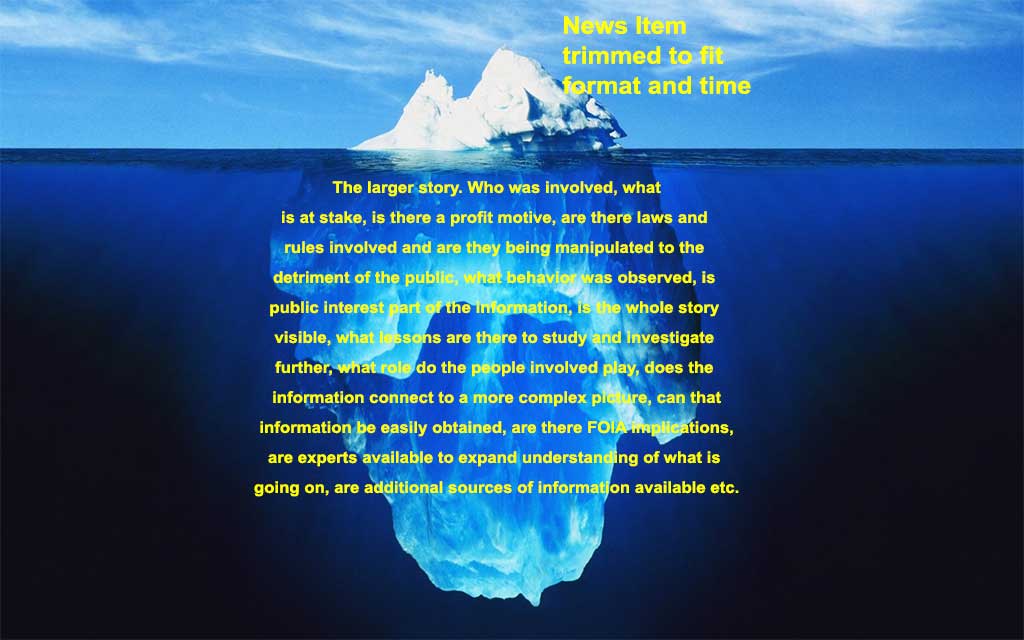 If you look at the way traditional news organizations work, whether they be newspapers or television, delivered by cable, in print or over the web, you will notice the lifespan of the news item is measured in hours and occasionally days. As an aside you will also notice little criticism of their major advertisers.

If you read or watch reportage on the same subject in the news it is clear that a news organization’s bias colors their reporting of stories, and may even reflect deliberate misrepresentation of the facts to manipulate their audiences. Understanding that, it is a simple matter to read more broadly to get multiple viewpoints and think things through on your own.

That is hardly a ringing endorsement for making a single news organization your only source of information. It seems their audiences realize that too and it only self-fooling on the part of journalists that prevents them from seeing it.

“The first principle is that you must not fool yourself and you are the easiest person to fool.” - Richard Feynman 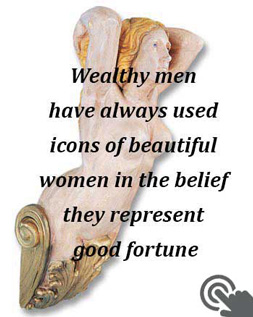 The race to get measurable audience share in a particular demographic so the news organization can charge more for advertising may be forcing individual news items to be similar to the rotating images on a slot machine, a constant rush of rapidly changing information, bells and whistles to get viewers’ attention without comprehension.

The news is also served up as an offshoot of entertainment. What has being beautiful with big breasts have to do with the news?

NEWS AS TEASERS TO A LARGER BODY OF KNOWLEDGE

When you invest enough time in covering the news it is amazing how much valuable information flashes by that is really important to understand, and not simply to see and forget. Life is an experiment in which understanding human behavior is a critical element in determining our futures and therefore it is absolutely essential to know as much as you can about how the people and institutions around you work.

For example, Watergate was a massive scandal that brought down the Nixon White house. It involved lies from the top of government down, it exposed the complicity of Attorney General Mitchell, the perpetuation of wars responsible for the deaths of millions of people for political gain, it involved an FBI number 2 official leaking files to the media for spite and revenge, it involved using junior reporters in a newspaper alleged to have senior reporters who were mouthpieces for the FBI to report on the story, and it involved claims of the wonders of American journalism rather than the skulduggery of a scorned FBI official.

Watergate offers practical insight into criminality, greed, naked ambition, corruption, abuse of the law, human behavior, and most importantly, the complete lack of concern for human lives. The story of Watergate is not a movie ending, but an opportunity to understand human behavior and tactics so we can develop skills and strategies to do something about it.

Another news item is behavior change although it seldom covered. Everyone talks about New Year’s Resolutions and makes light of breaking them. Yet no one covers the astounding effectiveness of the military’s use of behavior change to turn millions of totally average people into potential killers in a matter of months. In addition to the military effectiveness in rapid behavior change for individuals, their skill in hoodwinking recruits into murdering people in illegal wars, and then in getting these people to stand like trained monkeys in arenas around the country accepting adulation from a public equally as conned in is nothing short of miraculous. That is a process worth studying, for two reasons.

Given the critical importance of people being able to understand and change our own behavior, the mechanics of doing so should be taught in school. If we learn how to change our behavior we can change who we are and what we can do with our lives. Secondly, it is important to understand how we can so easily be conned in. We need to understand what propaganda is, how to recognize it and defend against it. War propaganda is selling America alone an $1,800 per person annual contribution to military spending. That's a lot of money to give to support the wet dreams of seriously deranged people.

Another newsworthy item is the effectiveness of the Jews. They have been scorned and persecuted for centuries, their land has virtually no resources, it's a desert, and yet they are one of the most effective groups on earth. Where is there a course on Jewish effectiveness, with a step by step guide to replicating it? There are a lot of people in the world that would benefit from the lessons.

And in one last example, look at our economic system.  Our entire economy is based on buying an endless stream of goods and services we can do without.  Ingvar Kamprad, the billionaire founder of IKEA wore second hand clothes to set a good example for the rest of us. José "Pepe" Mujica was the 40th President of Uruguay and his views on leadership offer a completely different view of how a politician should behave. And here is a sobering thought about goods produced that never get sold. Do a search for “what happens to unsold clothing” and you will get a huge number of results. Most of them get sent to landfills so they do not end up in second hand stores and discounters which would undermine their value. When I was a student I worked for a major retailer in the toys department. All of our unsold and returned items were compacted in trash compactors for the same reason. The bottom line is we are never supposed to understand how much less something is worth than we are asked to pay for it. I worked with people from EDS who were part of GM and GM cars cost of production for Cavaliers at that time was roughly 18% of the retail price of $12,500. All the rest of the price difference was in overhead for sales, finance, administration, and the dealer network.

Today, everything being made is made with software designed to put the least amount of material in the product for the estimated lifespan. The lifespan is a matter of the manufacturer deciding how little quality he can add to the product before it falls apart so you can be made to buy more. It’s called planned obsolescence. The author of the article says:

“Consumers sometimes see planned obsolescence as a sinister plot by manufacturers to fleece them. But Philip Kotler, a marketing guru (see article), says: “Much so-called planned obsolescence is the working of the competitive and technological forces in a free society—forces that lead to ever-improving goods and services."

I will be free to call bullshit on that. Here is why. A large percentage of American families have minimal savings, have jobs undermined by foreign workers, robotics and AI, and are told in the future they will live on some form of guaranteed income provided by the government. And businesses want people to spend needlessly for goods deliberately designed to fail so they are compelled to buy more? Please!

It’s time to get educated, and since everyone is too poor to stop working and borrow money to go to school, hopefully “News You Can Use” can help you extract knowledge from the world to build your own curriculum.

"It is also in the interests of a tyrant to keep his people poor, so that they may not be able to afford the cost of protecting themselves by arms and be so occupied with their daily tasks that they have no time for rebellion." - Aristotle in Politics (J. Sinclair translation, pg. 226, 1962)


And as an aside, p2p.media is not against capitalism, it is the abuse of capitalism that is the problem. This Monty Python skit points out the same idea with eating. Or TV watching. When you watch TV you are simply watching other people earn a living, which you can do by going to a service station and watch people fix cars, or a grocery store and watch clerks ring up purchases, or you can watch guys repairing streets. It sounds silly when you think of it that way. TV has been described as the opiate of the masses, a diversion from paying attention to what is really going on while everyones' attention is diverted like a magician's sleight of hand.

I have a new form of entertainment, and it is hilarious. Once you understand the game of manipulation, lying and bullshit, it is highly entertaining to look for it and expose it. Like the Ram trick truck ad for the last Superbowl, implying Martin Luther King would have approved of the great works people who buy Ram trucks would do. Oh (says he/she/it in a fawning voice) such nice people and there is wonderful Ram trucks helping all the way just like mommy and daddy, awww.  Feel good bullshit and pure propaganda. Vox has the original Superbowl ad and talks about what Martin Luther King's opinion on advertisers. Here is what MLK really said about advertisers and advertising. Not the story Ram would have you believe, as usual.  Digging these rats out is a really good game. You should try it. You can spend hours at it and in the end you will be really learn how we are all being played for suckers.

By the way, an important point on search. Most of the big search engines are designed to find information for inconsistent search terms, using various types of Boolean logic and AI. So if you are looking for something, put in as many words that describe what you are looking for as you can and you will get more results and some information you may not have expected. Let the search engines do the work for you.